From Southeast Asia to the world

Enegra partners with mid-tier miners in Southeast Asia by contracting to purchase their production offtake to trade on global commodity markets.

In 2011, Enegra identified an opportunity to apply its expertise in finance, trade and logistics to reduce the risk of sourcing and trading commodities from emerging economies. Applying this approach to the global commodities coal market, but refining our business model for the local Southeast Asian market, we spent several years cementing trusted relationships with mid-tier miners in Indonesia.

Over a five-year period engaging with 16 local, mid-tier miners, the success and uniqueness of these relationships resulted in a 1.8 billion tonne Offtake Agreement. Today, this offtake provides us with a robust balance sheet with an audited net asset value in excess of USD 60 billion.

With our Head Office in Malaysia and operational subsidiaries in Singapore and Indonesia, this rapid growth was enabled through the development of intellectual property for every step of the commodity life-cycle. Whilst this includes novel, proprietary models for derivative and margin pricing, we believe that the true essence of our IP lies in something greater! That is, our local brand and reputation, with which 16 high quality, mid-tier miners have entrusted us to deliver economic and social outcomes that will set them apart from their global peers for the very first time.

Our global commodity trading expertise extends beyond public trading exchanges. We have also successfully marketed and negotiated supply agreements directly with downstream offtakers such as power companies and smelters. This provides Enegra with fixed contracted revenue streams to de-risk our business model.

It is this IP that truly brings an enduring impact to both Enegra and local, mid-tier mining communities. Through this unique approach, we will succeed in achieving sustainable economic and environmental, social and governance (ESG) outcomes for all participants in the trade lifecycle, along with community stakeholders, who are the ultimate beneficiaries.

The success of this model makes Enegra one of the largest owners of physical commodity offtakes in the world. Equally as important, this means we bring sustainable economic and community outcomes to mid-tier miners who are often exploited on price and margins when operating at suboptimal scale.

We have tokenised 100% of the equity in Enegra Group Ltd, with equity represented by the T-REX compliant EGX security token issued on the Polygon blockchain (ISIN: MYA159590209).

There are currently 85 million EGX issued to represent the ordinary shares of Enegra Group Ltd. The shares are held by a licensed Trust Company as Nominee on behalf of EGX token-holders, and all rights and distributions are passed on to EGX token-holders, including distributions and voting. As EGX are securities, in order to purchase EGX, investors need to first pass KYC/AML checks and be whitelisted. Once whitelisted, investors can buy and sell EGX.

As EGX are securities, in order to hold EGX in their wallet, investors need to first pass KYC/AML checks, agree to the EGX Terms & Conditions, and have their wallet address whitelisted.

EGX is listed and trading on XT, BigOne, and Biconomy exchanges.

Our people, the key to our success

Our board of directors has the full set of skills and experience necessary to develop world-class solutions, and manage a growing global business.

Matthew is an accomplished executive with extensive experience in banking, trade finance, commodity trading and logistics. He has a track record with executive boards formulating strategies and executing on time and within budget.

Prior to Enegra, Matthew worked in Westpac Institutional Banking, managing a portfolio in excess of $500M, broking acquisitions and leveraged buyouts.

Matthew has a B.Com (Banking, Corporate, Finance, and Securities Law).

Dian Fatwa is the Deputy Secretary General of the National Mandate Party of Indonesia (PAN). Prior to this role, Ms Fatwa spent 18 years in Australia as a professional senior executive at the Australian Broadcasting Corporation (ABC) in Melbourne Australia. She managed a diverse team overseeing Australia’s largest media network’s relationship with regional countries. She started her career as a TV news reporter, anchor, and documentary filmmaker in Indonesia. Her documentaries were nominated in numerous film festivals. During the pandemic, she established the Dapur Ibu Indonesia, a fresh and organic produce supplier linking smallholder farmers/producers to modern-trade and new markets.

Dian has been passionate about political activism for social justice and democracy since she was a teenager when her father was a political prisoner under the Suharto regime. Her commitment to public welfare is also evident from her volunteering for the Salvation Army’s Youth Street Program and Wesley Mission Victoria’s Children with Disabilities Support Program. Dian is a three-time cancer and Covid survivor.Dian holds a Master of Corporate Environment and Sustainability Management degree from Monash University, Australia and a Bachelor in Journalism from Bandung Islamic University, Indonesia. She has also completed various leadership programs including the Asia Pacific Leadership (APLP) Program with the East-West Center, Hawaii, USA, the Asialink Leadership Program in Melbourne, Australia, and the Leadership for Environment and Development (LEAD) in Costa Rica and Zimbabwe.

David was previously a Sr executive with BAE Systems, focussed on international business development, financing, management and marketing within the UK, the Middle East and Europe. Senior commissioned officer (Engineer and Pilot) in the Royal Australian Air Force.

Jeremy is CPA qualified and has a very strong commodity, treasury and financial markets background having worked 25 + years in a variety of large corporate and banking roles in Australia and the United Kingdom.

Jeremy is the founder and current managing director of Apxium, a financial technology business specialising in invoice financing and payments.

Jeremy has valuable commodity experience from his time jointly managing the worlds largest gold hedging book at Normandy Mining and also trading precious metal at Pru-Bache in the UK. He is also a former treasurer for the South Australian Energy Network (ETSA).

Tony brings over 20 year’s experience as a company director and entrepreneur in the UK, and is one of the original shareholders in Enegra.

He is currently Managing Director and co-founder of CVAM Ltd. Incorporated in 2000, CVAM has now grown to be one of the most successful independent companies of its type in the UK, trading in transportation assets across home and export markets, specialising in Africa.

Tony also acts as an advisor to a number of major FTSE100 financial institutions based in the UK, advisong on future residual value risk and exit strategies for their transportation and logistics portfolios.

The Enegra Management team has decades of experience working in Southeast Asia and Indonesia in particular, with a focus on mining and hard commodities.

Irnanda has considerable commercial and mining sector expertise, with more than 30 years experience in transforming and restructuring state enterprises and private companies to achieve better performance.

He is currently examiner of doctorate degree in Strategic Management and Accounting in the University of Indonesia, and has served as the Indonesian deputy Minister of State Owned Enterprises, and the board of companies such as Jasindo, Pertamina, and Garuda. He was also formerly the Chairman of the National Research Council of Indonesia, Surabaya Institute of Technology, PT MMU, and the NU Economic Development Division.

Eli is a technology and startup expert, with over 25 years hands-on operational and leadership experience in various industries and locations, specialising in the application of disruptive technologies and paradigms to transform organisations and industries – from Aviation in New Zealand to Telecom Services in Africa.

Eli is currently CEO of Blockchain Labs Asia and focused on FinTech, with ventures changing how people work and live, leveraging new technology to get things done – faster, cheaper, easier, better, and in a more people-oriented way.

Michael is a highly experienced Civil Engineer with over 12 years experience in the Indonesian mining sector, working in Sumatra, Kalimantan and Sulawesi.

He has worked on significant projects including, building an inland port in Jambi Sumatra with ability to handle 300 foot jumbo barges for movement of commodities and slurry pumping pipeline in Kalimantan. Michael has very strong technical analysis expertise and experience managing a large team in the field.

He is a graduate of Maranatha Christian University Bandung, majoring in Civil Engineering in the structural sub-field, and is ISO Licensed.

Windi has over 4 years of experience in ventures and investor relations. Her greatest strength is building relationships with investors, providing support, and making sure they are satisfied with the service provided.

As operations manager of Blockchain Labs Asia, Windi is involved with all aspects of running the incubator, and is often the first point of contact for investors and the ventures. Previously, Windi provided a freelance translation service for clients from Australia, United States, New Zealand, and Germany, translating content from English into Indonesian across various platforms and helping launch products and services into the Indonesian market. Windi also worked with Bookya in customer engagement for the Southeast Asian region.

Windi has a Bachelor of English Literature, and also has Blockchain certifications.

Our advisory board gives us the confidence to work in uncharted waters, knowing we have such deep experience to call on.

Alex has over 20 years’ experience working in the Financial Markets as a trader and broker with a specialisation in Options trading. With experience in Foreign Exchange, Fixed-Income and most recently, Commodities, he has a strong sense of Macro Fundamentals and Technical Analysis.

Alex is based in the UK and is delighted to work with Enegra to build out their trading operations globally. Alex has also followed the blockchain and digital securities sectors from inception and has a keen interest in Enegra’s development in this area.

Robin Coombe has over 20 years’ experience working in Oil & Gas, resources and infrastructure sectors in Australia and Japan. He has related expertise in business development, contract negotiations, business analysis and contract management.

Robin is currently based in Australia and is pleased to work with Enegra to find ways to grow the business, implement projects and to grow the investor base of the company.

Robin has an MBA and Engineering degree from the University of Adelaide.

Tim Burnell is a Senior Executive with considerable experience in marketing, communications and branding in the Oil & Gas, Aviation and Banking sectors. He brings to Enegra expertise in business strategy, corporate communications, customer experience, brand, culture and transformation at leadership and advisory levels with a global remit.

Tim has managed large, high performing teams across multi-markets with budget ownership up to USD 400 million annually, with organisations such as Etihad, Emirates, BP, and First Abu Dhabi Bank.

Tim holds an MBA in International Business, from Cranfield University.

Enegra is currently offering a further 2 million EGX via private placement to raise funds for trade finance, mainly for monetisation of the coal Offtake Agreement that Enegra has established with 16 mid-tier mines in Indonesia. 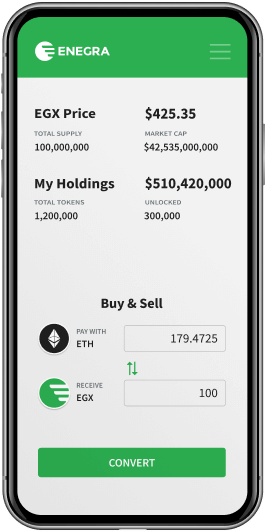 Automation & 5G Are Driving The Future Of Mining

Key technologies are shaping the process of…

The controversial omnibus law will change how…

Electric vehicles will drive the growth of Indonesia’s…

Thank you! Your submission has been received!
Oops! Something went wrong while submitting the form.